Dry Needling: Everything You Need to Know 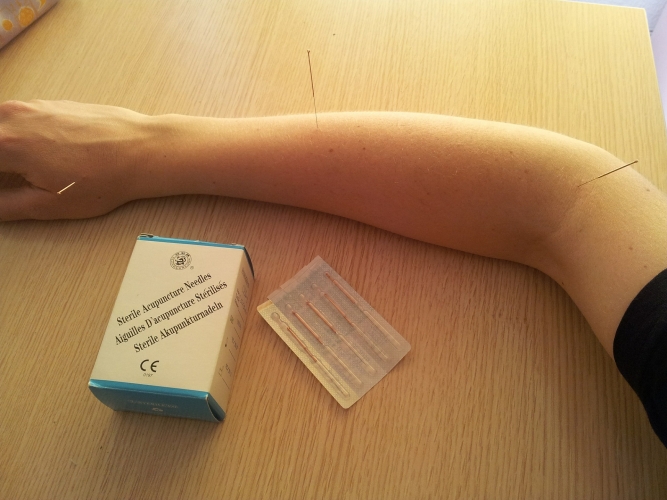 Physiotherapists have a reputation for brutally digging into trigger points (or ‘muscle knots’, as they are colloquially known) with their hands, thumbs, fingers and even sometimes elbows, leaving their patients feeling battered and bruised (temporarily, of course!).

If only there was a technique that could treat trigger points without inflicting the same amount of pain, and without causing grown men to weep. There is, in fact, such a technique and an increasing number of physiotherapists are becoming trained in it, sparing their precious hands and their patients’ pain thresholds at the same time.

Sometimes referred to as intramuscular stimulation or myofascial trigger point needling, dry needling is mainly used to treat trigger points, as well as being useful in the treatment of neural or muscular injuries. It is commonly confused with acupuncture; however dry needling only targets the local area of pain, whereas acupuncture purports to treats a wide range of health conditions.

The term dry needling was coined to differentiate the process from injections into the tissues with syringes often filled with medications or other substances.

The practice of injecting into myofascial trigger points was first used in the early 1940s, by Janet G. Trevall, an American physician and medical researcher, most commonly known for being John F. Kennedy’s private physician. Dr Trevall originally used larger, hypodermic needles to inject cortisone, saline and analgesia into myofascial trigger points, instead of finer acupuncture needles, thinking the latter would be too small to be effective.

In 1960, Dr Trevall presented a lecture at the US Air Force Academy on trigger point therapy. Dr David Simons, a physician turned Air Force lieutenant colonel, was in the audience and was so impressed by her lecture that he asked if he could collaborate with her. Their research and subsequent findings produced the pioneering Trigger Point Manual which was published in 1983.

Deep dry needling for the treatment of trigger points was first practised by Czech physician Karel Lewit in 1979, when he noticed that the success of needling for pain relief had nothing to do with the analgesia or substance that was injected into the trigger point but the needle insertion itself.

Dr Peter Baldry further refined the technique of dry needling by recommending insertion of a fine needle into the target trigger point for 30 seconds initially. The muscle was then palpated to assess whether the needle needed to be reinserted or not depending on if the trigger point persisted.

Canadian physician Dr Chan Gunn is credited with moving dry needling away from trigger point therapy and developing a radiculopathy model, using the technique for the treatment of neuropathic pain.

There has been extensive debate among health professionals regarding the cause of trigger points. However, they are often said to occur in response to:

The main goal of using dry needling treatment is to restore correct muscle function and accelerate pain reduction. Muscle tension can affect the complex electrical and chemical communications that occur in the nervous system. If a trigger point forms within a muscle, these messages are interfered with and the transmission of pain signals and pain-relieving chemicals is inhibited.

During treatment, a needle is inserted into trigger points within the muscle. These trigger points are areas of tension where the muscle fibres have become tight, compressing associated capillaries and the nerves. This results in blood supply and function being compromised and the muscle being unable to flush out chemical by-products, therefore often aching and feeling fatigued.

A single use, individually packaged, sterile needle which is very fine (0.16 – 0.3mm) is inserted into trigger points in the muscle. Blood pools around the needle causing the muscle fibres to relax and flushing away lactic acid. Patients might feel a small sting as the needle is inserted, however it should not last beyond a few seconds and very little should be felt while the needle is in place.

Patients may also experience a slight muscle ‘twitch’ (contraction). Many physiotherapists consider this the goal of the treatment, as the local twitch response activates endogenous opioids, which help to facilitate pain relief.

With the needle in place circulation improves and the trigger point (hopefully) dissipates. Needles are then disposed of immediately in a designated sharps bin.

What is the difference between dry needling and acupuncture?

Acupuncture focuses on treatment of various medical conditions through restoring ‘Qi’ – the flow of energy through different meridians throughout the body. Acupuncture is a part of traditional Chinese medicine, originating in 100BC and focuses predominantly on meridians and energy balances and flow. There are approximately 400 ‘acupoints’ which often don’t correlate to the anatomical regions attempting to be treated. The anatomical and physiological basis for acupoints is unknown and, despite its large number of supporters, there is scarce evidence to suggest that acupuncture is effective.

Acupuncture is used not only for pain, including headaches and migraines, but also nausea caused by cancer and its treatment, as well as routine post-operative symptoms and sleep disturbances especially in women going through menopause. It has also even been known to be used in the treatment of infertility, blindness and schizophrenia. To those trained in western medicine, the prospect of acupunture actually treating such disparate conditions seems wildly unlikely.

In contrast, dry needling has a very limited scope. It focuses on treating specific areas of muscle tightness and there are scientifically plausible ways this may work.

Quite simply, the major similarity between acupuncture and dry needling is that they both use the same tool!

How is dry needling used by physiotherapists?

Dry needling is used by physiotherapists in conjunction with various other treatment modalities such as manual therapy, soft tissue massage, exercise prescription and stretching.

Needling is often favoured by physios over the manual release of trigger points to preserve their hands and fingers which can sometimes sustain repetitive strain injuries due to long days treating patients. Dry needling is also often less painful for the patient in comparison to manual trigger point release, although it can sometimes take several treatment sessions for a positive response to be achieved.

One important note about dry needling is that while it helps to treat the pain it doesn’t necessarily address the cause of the dysfunction. Therefore, if the aggravating posture or activity continues, trigger points with re-accumulate and pain will most like occur again. For this reason, it is best used in conjunction with other treatment techniques, such as tailored exercise, that address the root cause of the issue.

There are some circumstances under which dry needling should not be performed:

This is not an exhaustive list – always speak to your physio about any medical conditions.

Be sure to tell your physiotherapist if any of the following apply:

Although dry needling is a reasonably safe treatment, there are potential risks (as with any technique) that both the patient and therapist should be aware of.

Bruising, residual discomfort, fainting or nausea may be experienced; however these symptoms should not last longer than a couple of days post treatment and if they persist medical advice should be sought.

At the more dangerous end of the spectrum, if the needle is inserted too deeply into certain areas, it may cause a pneumothorax, where the needle pierces the lung causing it to collapse. This is a serious complication which requires immediate medical attention. Given the severity of this risk, practitioners are trained to utilise great caution when treating any area in the proximity of the lungs.

Other potential but infrequent side effects include syncopal episodes, local haemorrhage, bleeding or haematoma formation.

There is a growing body of evidence supporting the use of dry needling and its efficacy, with the technique now funded in some public hospitals. It is covered by private health insurance companies in Australia if it is performed as part of a physiotherapy treatment session.

While the exact strength of effectiveness is not known, there are some studies that show a benefit for treating muscular or myofascial dysfunction. One major review of 35 randomised controlled trials found a reduction in pain and improvement in function in patients with chronic back pain. However, these improvements were only observed in the short-term.

Unfortunately, there is a dearth of large studies with long term follow up to test the effectiveness of dry needling.

The known benefits of dry needling include being minimally invasive, cost effective, reasonably safe and easy for practitioners to integrate. Deep dry needling appears to be to be more effective than a superficial approach in the treatment of muscular trigger points, however it is safer to use the superficial technique in certain areas such as over the lungs and large blood vessels.

Dry needling is a safe technique which may be useful in addressing muscle dysfunction. Many patients report fantastic results in response to needling and it can be an incredibly valuable therapeutic tool. A physiotherapist qualified in dry needling will be able to advise on whether it is a suitable option for your condition.

Importantly, though, dry needling does not address underlying causes of dysfunction and it should therefore form part of the treatment package, not all of it. Needling should always be used in conjunction with other therapeutic techniques such as manual therapy, exercise prescription and postural education to maintain the achieved benefits and ensure that the pain does not recur.